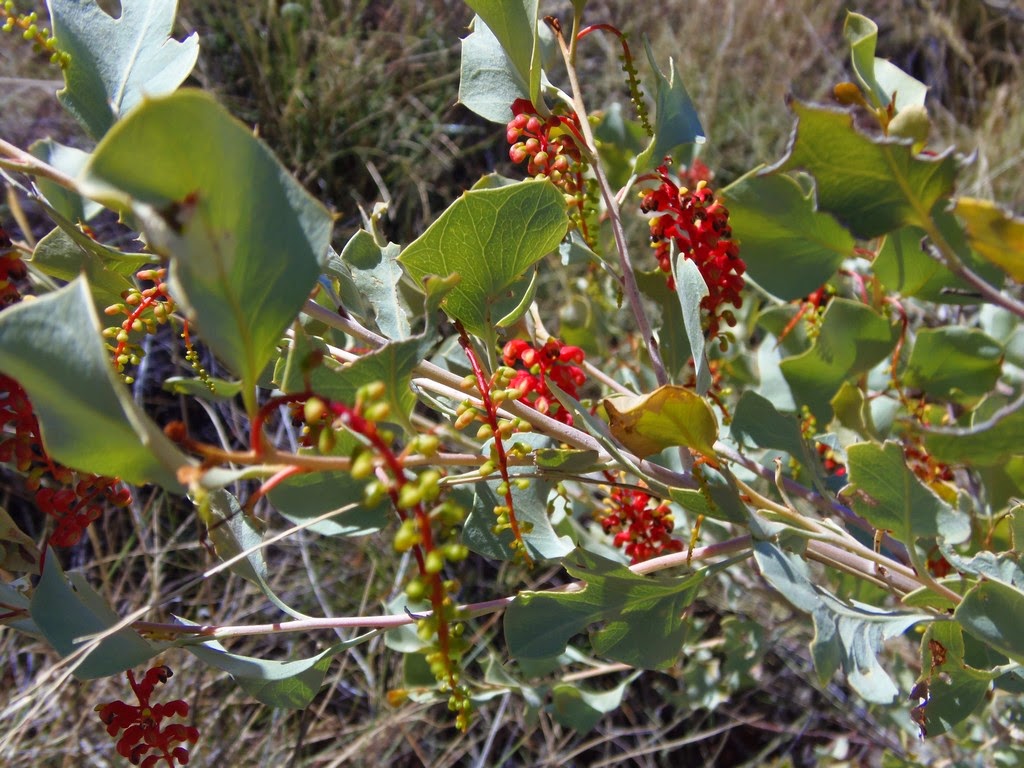 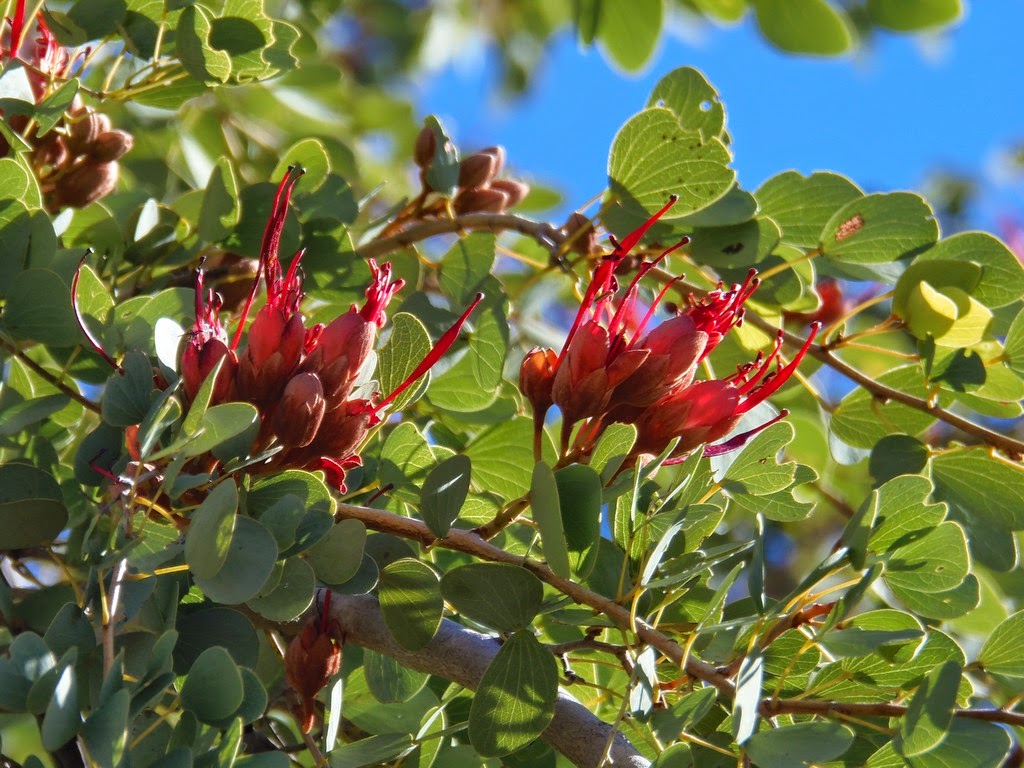 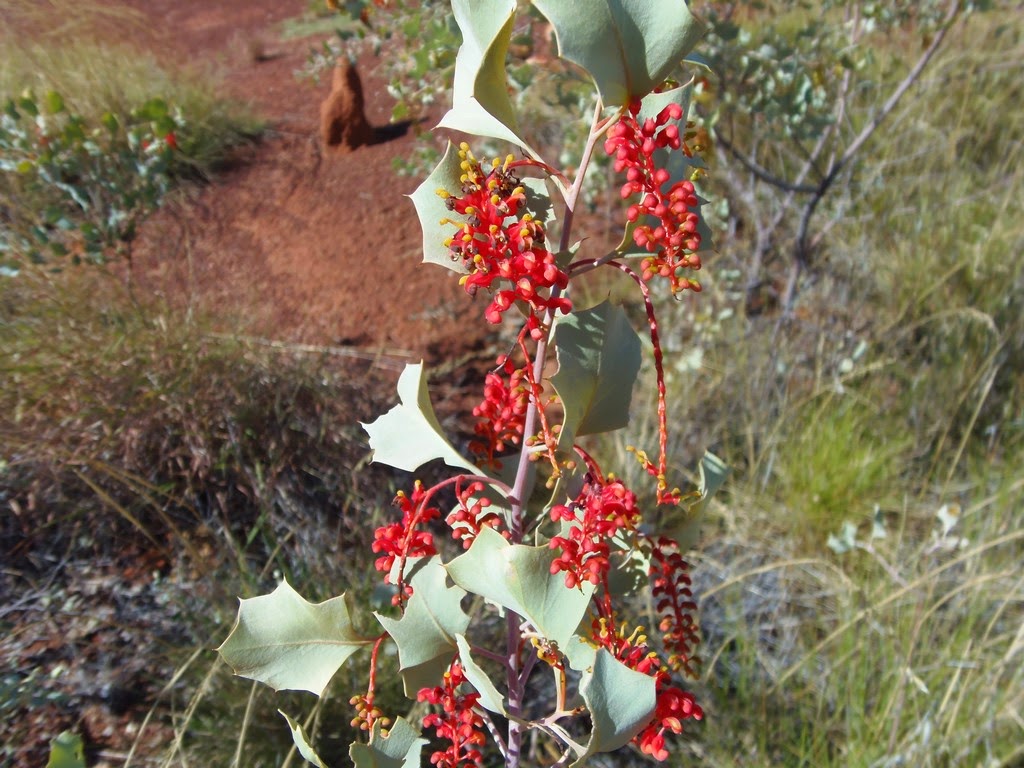 Still travelling west towards the western coast and the seaside town of Derby, we chose a site for an overnight lay-by that were expected to be boringly similar to others that we have encounted. On arrival, we were indeed pleased to find a magnificent Boab tree in the centre of a small area just off the road with a good level gravel surface for a change. Although Boab Trees can be seen all along the route that we had taken, some very large in dimension, this specimen was a massive example and probably close to its ultimate maturity. I paced the circumference and it measured 26 good strides which indicated to me that it was at least 20 metres. I estimate the height to be about 12 metres or so. An additional amazing feature was that the trunk was essentially hollow with a cavity accessible through a large hole in the trunk that served as a doorway. "room" began about 2 metres below ground level with a roof some 3 metres high. I would say that at least 10 people could comfortably be accomodated inside. I had heard of a large Boab in Derby called "The Prison Tree" that was estimated to be 1500 years old, however, those that had seen it, said that this specimen was much bigger and therefore presumably a lot older. 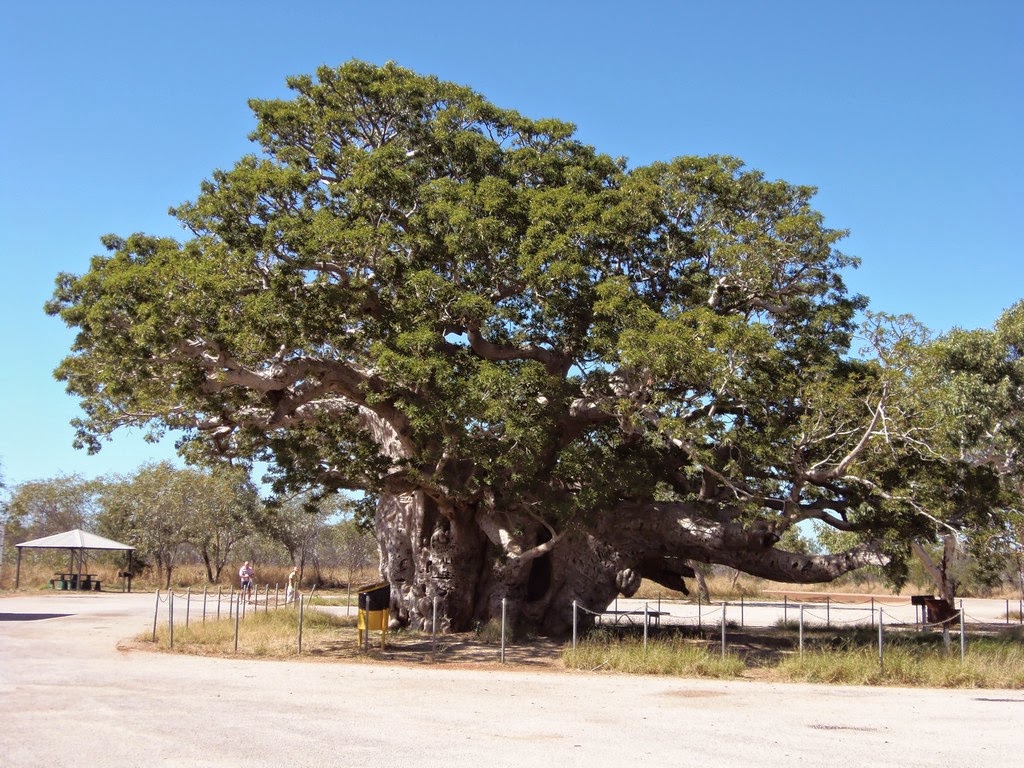 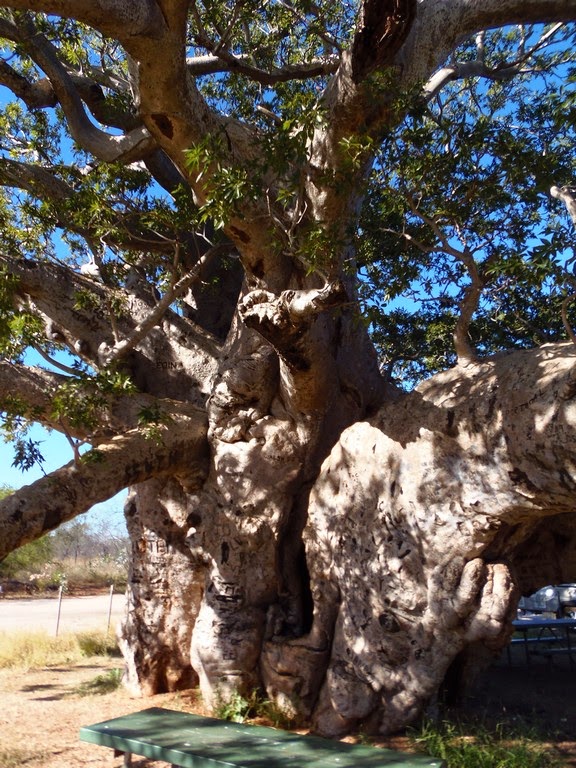 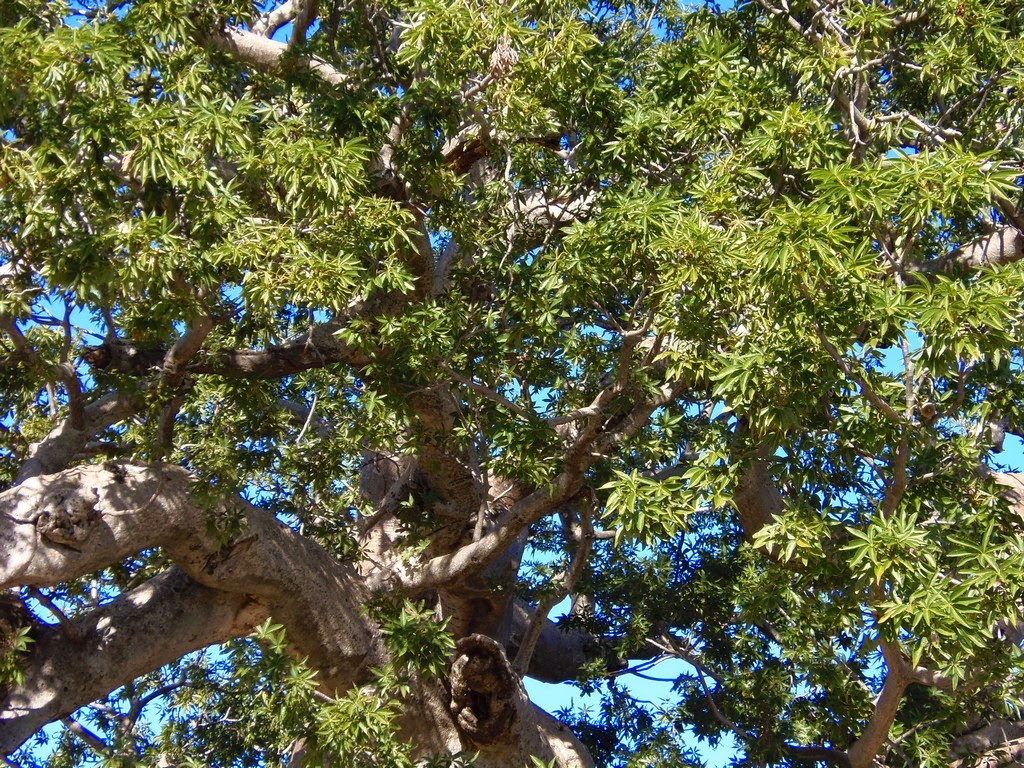 Inside the giant Boab could house 10 people 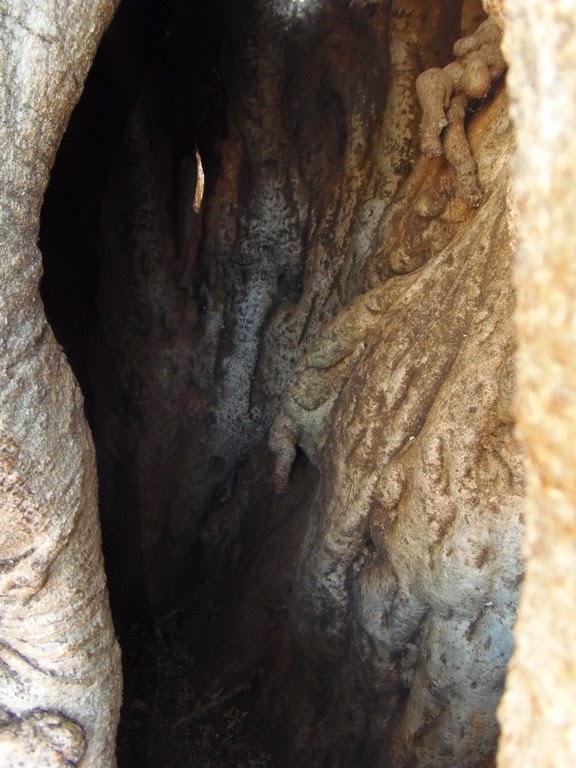 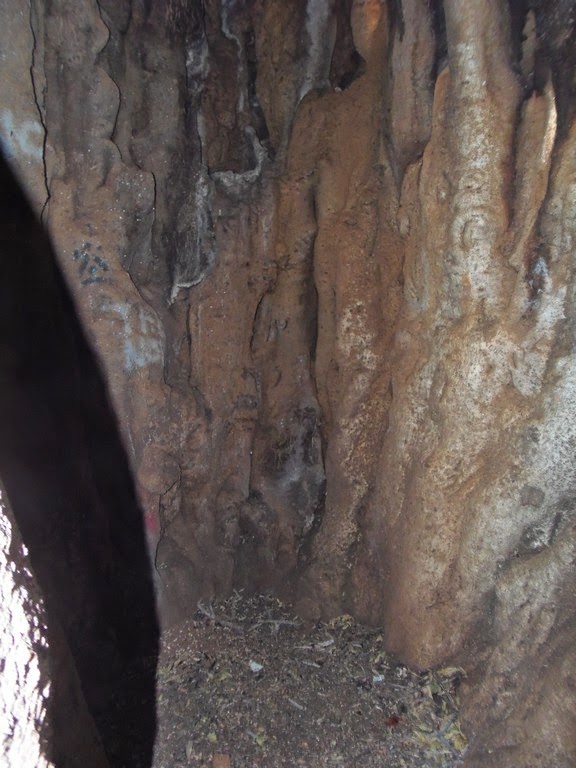 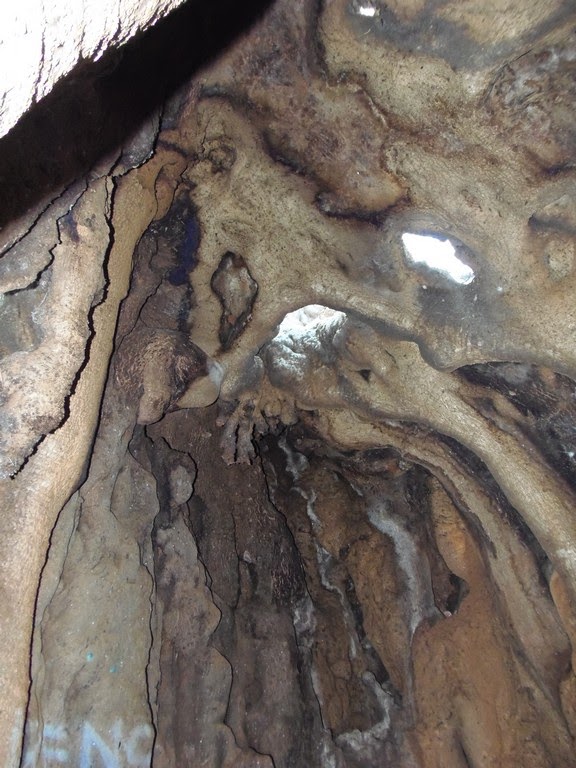 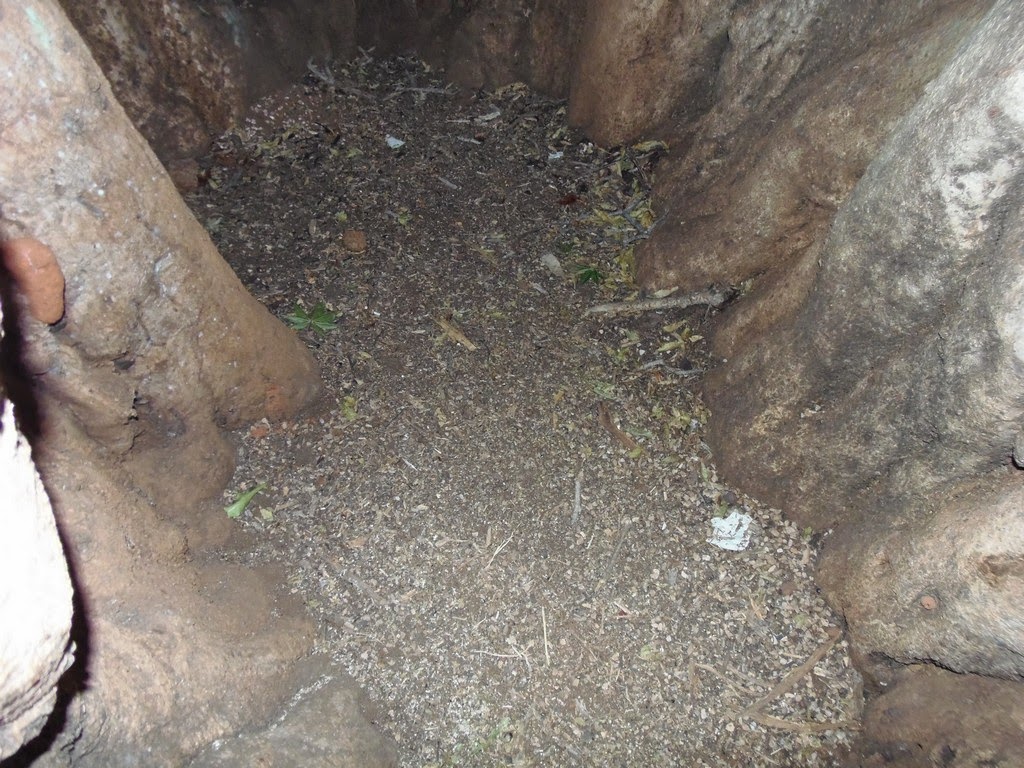 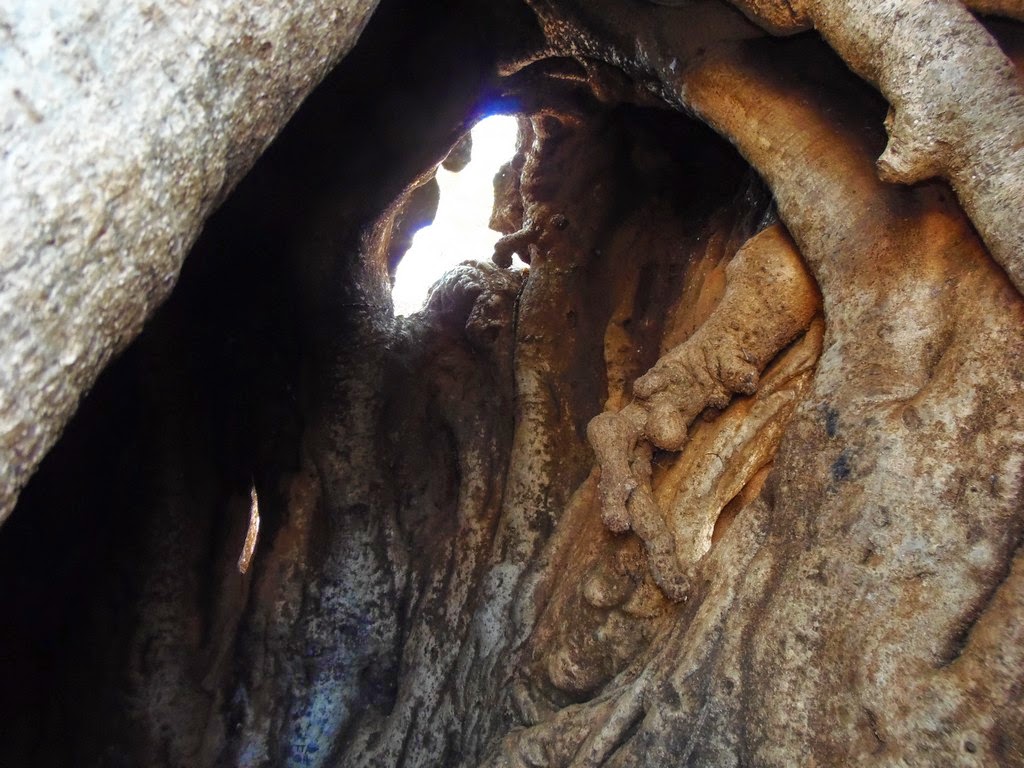 The Australian Boab tree (Adansonia gregorii) is in the family Malvaceae. It is related to the Madagascan and African Adansonia species known as Baobabs.  It is sometimes called a "bottle tree" but in Australia they are usually referred to as just Boabs. The name "bottle tree" relates to the swollen trunk that can reach a massive girth of up to 20 metres, about as big as ours. Endemic to Australia, Boabs occur in the Kimberley region of Western Australia, where we are now and east into the Northern Territory.  The trees are deciduous, dropping all their leaves during the dry season. Since the dry season is also the main tourist season, most travellers only get to see the grey brown skeletons. We were very lucky as it is early in the dry and most still had their leaves, including this one.

There are two theories about how Boab trees arrived in Australia. One says the seeds have floated here from Africa and spread from the coast. The other theory suggests Boabs might have survived from the time when Africa and Australia were both still part of one continent, the ancient Gondwanaland, 65 million years ago.
A mature Boab like this specimen is magnificent. Though not very high, up to 15 metres, they are huge. . Every Boab tree is unique.  In fact the range of shapes and sizes that can be seen whilst in this region is amazing. The Boab is a very slow growing tree.Some individual Boabs are sad to be 1500 years old and older, which makes them the oldest living beings in Australia, and puts them amongst the oldest in the world..
"Aboriginals used the giants as shelter, food and medicine. For the white settlers, they served as easily recognizable land marks and meeting points, and as impromptu prison cells, such as the “Prison Tree” in Derby estimated to be 1500 years old."  All Adansonia species, Australian and African, have long been used as a staple food source by the indigenous populations. Seeds, pith, in fact most parts of the tree are edible. Studies on the African species have shown parts of the tree to be exceptionally high in Vitamin C, more than ten times the Vitamin C content of oranges!  It is known that the Australian Boab seeds are very high in Vitamin C as well. 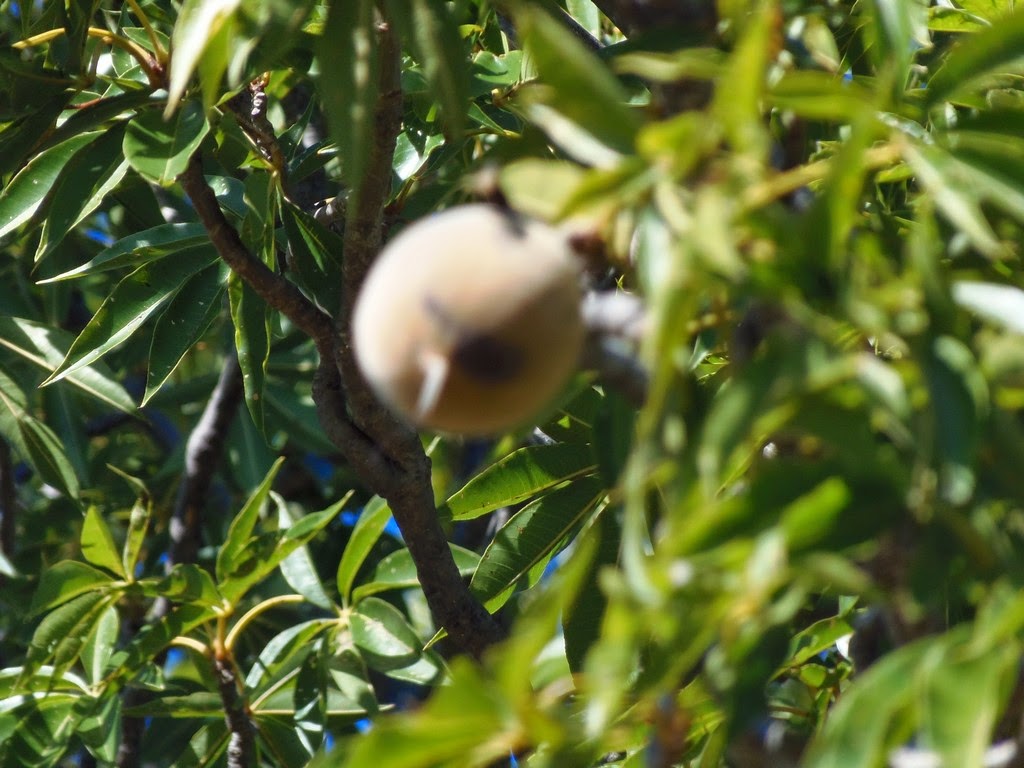 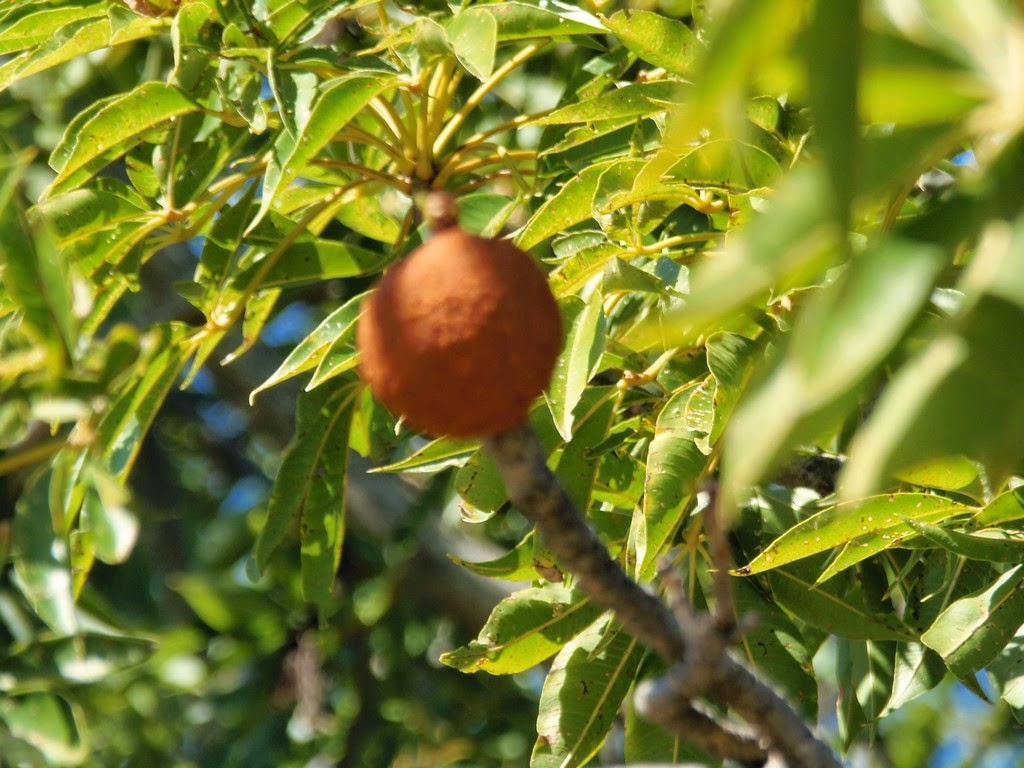 We  found yet another tree of interest here, the Bloodwood. The name Bloodwood stems from the dark red to brown kino, the name of the plant gum produced by various plants and trees, particularly Eucalyptus, in reaction to mechanical damage that accumulates on wounds on the trunks. In Australia the name refers to either of two distinct groups of eucalypt of the genus Corymbia. 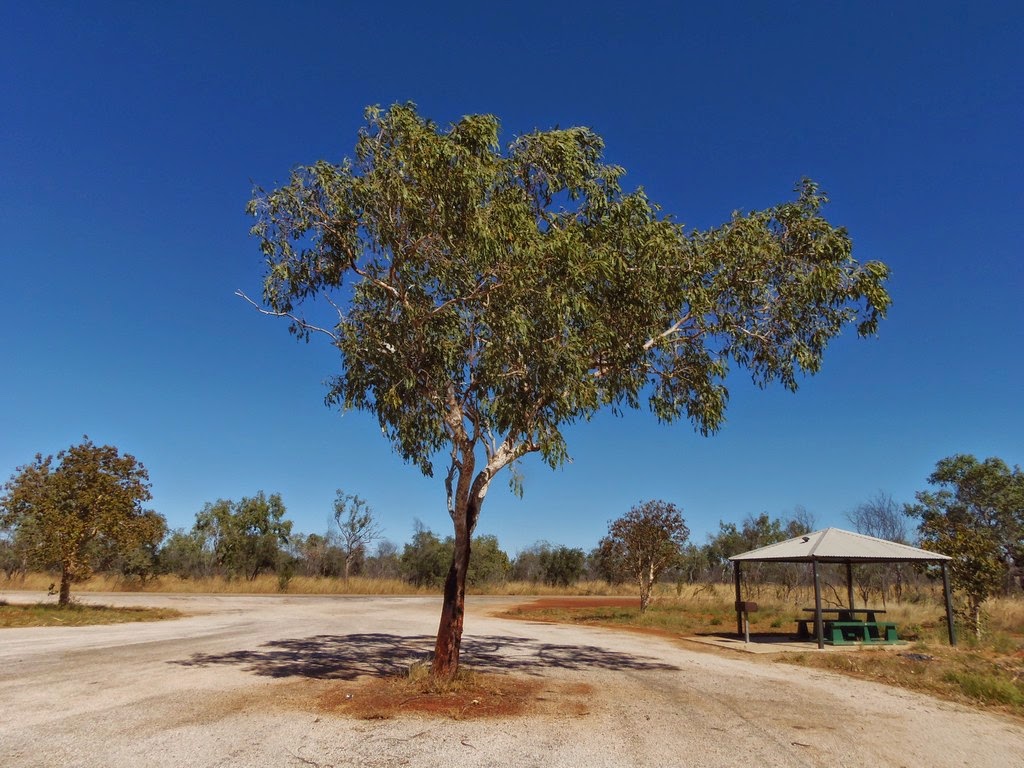 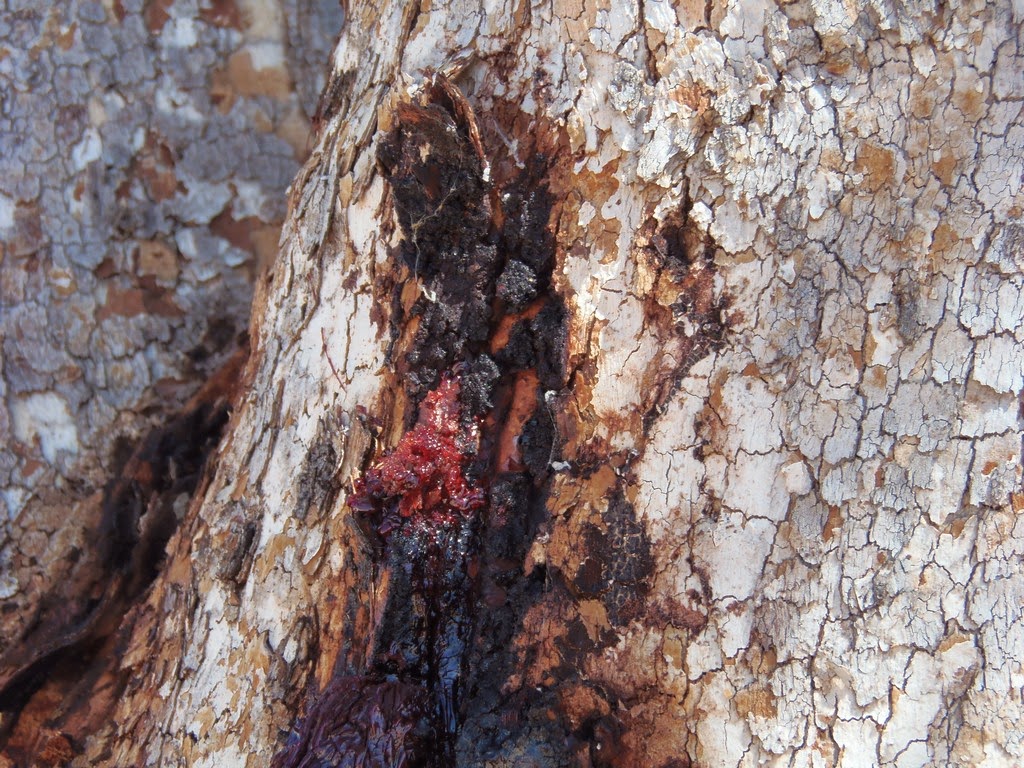 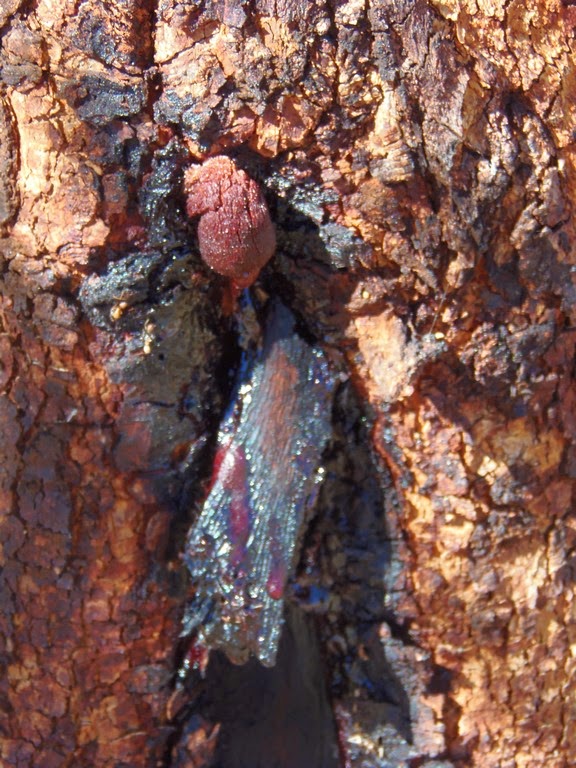 Wait! there is more. We also encountered a most interesting fellow. Mike Pauly is walking, pushing a sort of buggy, around Australia, on this leg from Fremantle south of Perth to Darwin, raising funds for Arthritis Research and Men's Health via the Men's Shed organisation. That is a distance of at least 3500 - 4000 kms. When asked if he needed anything he answered that Vegemite and Baked Beans would be appreciated. Luckily, I could provide a 3/4 full jar of Vegemite and Marj supplied a tin of beans and a small cash donation. With that Mike parted company to continue his journey, If you wish to find out more about his exploits or to make a donation to his cause, I suggest that you visit his website, ozsoulwalk.com. 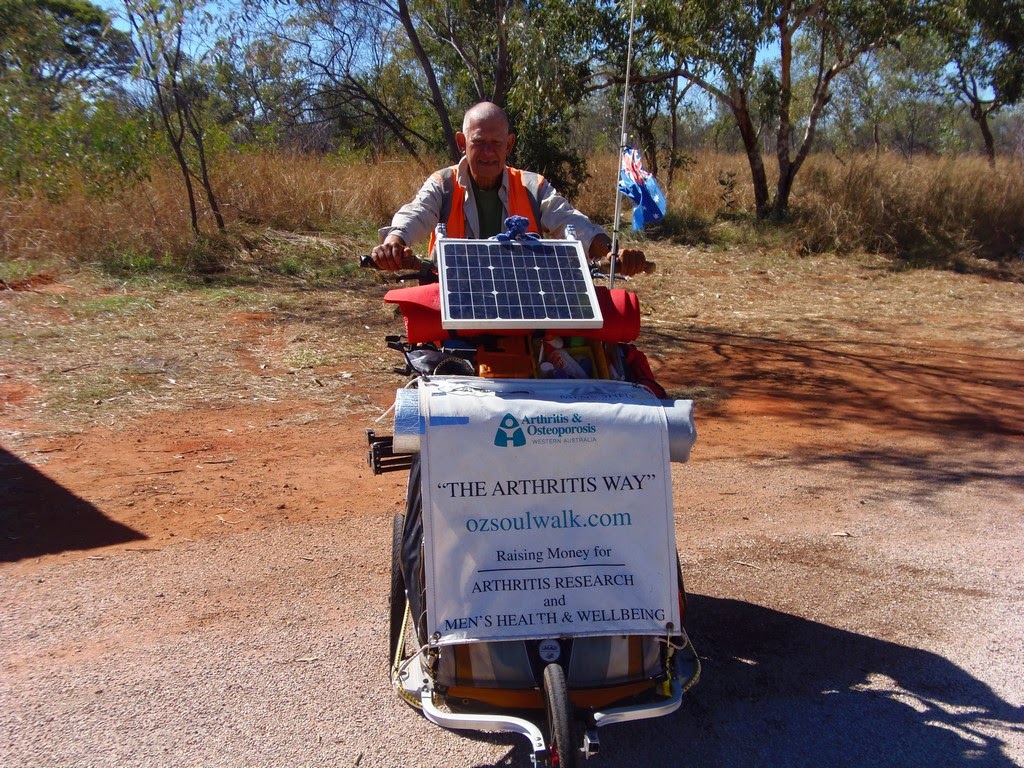